7 things you should know about Toastmasters

If you’re an aspiring professional public speaker, chances are you’ve heard of Toastmasters. With chapters across the United States and the world, it is one of the most ubiquitous public speaking organizations out there. But what exactly is Toastmasters? Who is Toastmasters for? Is it open to just anyone, regardless of experience? How much does Toastmasters cost?

For answers to these questions and more, read on.

Toastmasters has a local chapter-based structure, and weekly hour-long meetings are the norm for most clubs. The average club has about twenty members. Members can take on specific roles within their clubs, such as Ah-Counter (responsible for noting any overused words or filler sounds), Timer, Grammarian, and more. Members give a series of both organized and impromptu speeches and receive feedback on their speeches from other members.

7 things to know about Toastmasters

As Grant Baldwin discusses in his podcast on Toastmasters, the clientele of a typical Toastmasters chapter meeting may be very diverse. It could include a real estate agent wanting to improve her public speaking skills. Or you might see a businessman wanting to practice his upcoming presentation for a boardroom. It doesn’t have to be for a job, either. You might see a stay-at-home mom who just wants to become more confident in her public speaking skills.

Ryan Avery was the 2012 Toastmasters World Championship winner. In an interview with Grant Baldwin, Avery described the dedication that Toastmasters members have to their chapters. “They’ll wake up at 6:00 AM to drive two hours to record you,” he said. “That’s a pretty crazy thing, right? Being able to know nothing about speaking and jumping in and finding people willing to help you, that is without a doubt, a major, major pro to it.”

2. You can develop your talk

There are a number of upsides to trying Toastmasters. Here are a few: If you’re just starting out as a paid public speaker, you’re probably trying to find what material works. (For more on developing your talk, check out this episode of The Speaker Lab podcast.) The stories, jokes, content, openings, closings, and transitions may be easier to practice in a Toastmasters setting. Maybe you’re a naturally nervous speaker. There’s nothing wrong with feeling some nerves before you go speak. Having some of that excitement or nervous energy before you speak reminds you that what you’re doing matters. It forces you to focus your attention and be fully present. One of the best ways to minimize those nerves is to practice so you know exactly where you’re going with your talk.

3. Toastmasters is not necessarily for professional speakers

Toastmasters has a broad audience, many of which are not trying to build a public speaking business. Rory Vaden was a Toastmasters member who made it all the way to their competitive World Championship of Public Speaking event. As he said in The Speaker Lab’s podcast episode #404, Toastmasters “is not really for professional speakers. It’s just for people who want to be better at speaking. It’s the easiest, fastest, most encouraging place that you can go to immediately get stage time for free and get quality people and real coaching, instruction, feedback, and practice.”

Notably, Toastmasters is not an organization oriented towards getting professional speakers booked and paid to speak at gigs. According to Vaden, “my advice to people is to stay in Toastmasters as long as you can until you’re speaking so much that you’re getting that stage time weekly from other paying gigs and engagements.” (interested in hearing what Vaden did after Toastmasters? Check out the podcast audio here.)

4. How much a Toastmasters membership costs

How much does Toastmasters cost? According to the Toastmasters website, Members pay international dues of $45 USD every six months, plus a new member fee of $20 USD. However, attending club meetings as a guest is free!

Although Toastmasters meeting structures vary somewhat by chapter, many meetings last about an hour or so and include three major parts: impromptu speaking (aka Table Topics), prepared speeches, and formal evaluations.

During the improvisation part, a member who has prepared the topics, called the Table Topics Speaker, states a topic and calls someone to the desk. The speaker then has a short period (e.g. one to two minutes) to respond.

For prepared speeches, a few members (generally 2-4) present a prepared speech in front of the other club members for a set amount of time (normally between 5 and 15 minutes long). Participants can present on any topic of their choice, but speeches usually follow the Toastmasters guidelines. After delivering their speech, the speaker is evaluated by another member. An evaluator typically congratulates the speaker on a job well done, provides positive feedback, and offers areas of improvement. This immediate feedback allows the speaker to know his recognized strengths and gives him ideas on how to improve his presentation techniques for his next speech.

After the evaluation of the speeches, three members each present a report on a technical point. The grammarian identifies grammatical errors and repetitions. The Ah-Counter keeps track of the number of “uhs” “ums” and related pauses in the speech. At the conclusion of the evaluation session, the general evaluator makes a general comment on the whole evening and gives advice for future meetings. At the end of the meeting, attendees may vote for the speaker they believe spoke best at presenting their Table Topic, prepared speech, or formal evaluation.

Interested in learning how to become a certified public speaker? Toastmasters offers an accreditation through their Accredited Speaker Program. For members of Toastmasters, the Accredited Speaker program is designed to give professional speakers an edge through certification by Toastmasters International. If you are a current member, have earned a qualifying education award, and have given a minimum of 25 non-Toastmasters speaking engagements within the past three years, you may be eligible to apply. (want to learn more about professional speaker certifications? check out this podcast with Grant Baldwin.)

According to their site, Toastmasters seeking a professional-level speaker are directed to the Accredited Speaker profiles, where they can view all Accredited Speakers who have chosen to have a profile and contact you for their speaking engagement. After you have received the designation, Toastmasters International will work with you to gather information. They will also write you a professional profile that highlights your expertise and skill as a speaker. Once you have approved your profile, it will be posted on the website along with your contact information.

As mentioned above, Toastmasters hosts the annual World Championship of Public Speaking, one of the largest speech contests in the world. What does it take to win the Toastmasters World Championship? Well, in addition to commitment through hours spent practicing in meetings, some aspects of the process involve learning the right formulas. Want to learn more about those formulas? The Speaker Lab podcast recently recorded an episode breaking down a speech from 2018 Toastmasters Champion Ramona J. Smith.

So you’ve gotten a sense of what Toastmasters is (and isn’t). You’ve learned about the World Championship and other certification opportunities Toastmasters offers. But perhaps you’d still like to learn more about how to get started with your public speaker business. Is that you? Satiate your desire to learn more about public speaking by checking out The Speaker Lab blog here. Happy speaking! 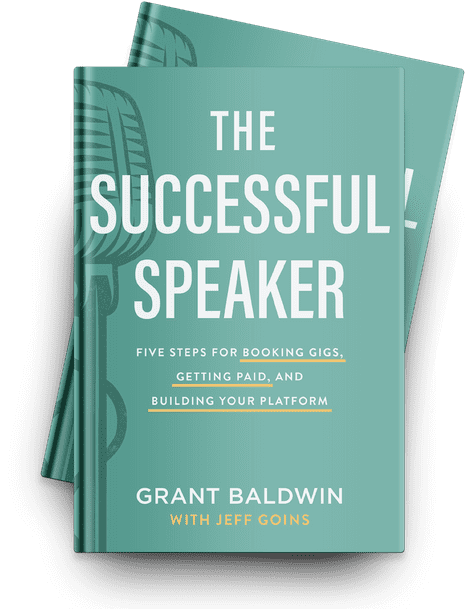 Get a Free Copy of The Successful Speaker!

Learn the exact system TSL founder Grant Baldwin used to build a 7-figure speaking career and help THOUSANDS of other speakers Get Booked and Paid to Speak™ on a consistent basis.

The Successful Speaker will show you how thousands of speakers in every industry are using the SPEAK Framework™ to build thriving speaking businesses and get paid to share their message with the world.

Get Your Copy NOW

Here are a few other resources you might find helpful.

Podcast Transcript
How to create marketable assets that will grow your business
Maryalice: Hey everyone, Maryalice Goldsmith here, Director of Student Success at The Speaker Lab, and today I am joined by our very own Elite Concierge and Coach, Katie Campbell. Really excited to be with you...
Speaking
How to memorize a speech
Introduction You've just been invited to give a talk. That's great! Whether it's for your speaking business or just a short speech in front of one of your community groups, you may be wondering how...
Podcast Transcript
How to be your authentic self
Maryalice: Hey everyone. Maryalice Goldsmith here, Director of Student Success for the Speaker Lab, and today I am taking over the podcast to present to you a fabulous student in our student highlight series. I...
Podcast Transcript
How to triple your income from speaking
Grant: Hey, friends - welcome back to The Speaker Lab Podcast. Good to have you here with us today. I'm excited to have a good friend of mine who is back to give an update...
Speaking
How to give an award acceptance speech
Introduction Congratulations! You've won an award. Maybe you've been selected for the prestigious National Speakers Association's Speaker Hall of Fame. Maybe you've been named volunteer of the year for your local service club. Whatever you've won,...
Speaking
Should you hire a speaking agent?
Introduction At The Speaker Lab, we’re dedicated to helping people from all walks of life become professional, paid speakers. As a result, we field a lot of questions about speaking agents, such as "Should you...
Podcast Transcript
How to Face the Grind of Building a Business
Grant: Greetings friends. Welcome back to The Speaker Lab Podcast. We are joined once again by one of the fan favorites. One of my favorites, Mr. Erick Rheam is in the house, and we've got...
Podcast Transcript
How to Build Your Speaking Business and Not Just Get Gigs
Grant: Hey friends, welcome back to The Speaker Lab Podcast. Today we are going to be chatting with keynote speaker, David Avrin. I’m excited to talk about his speaking journey and also what he is...
Speaking
5 reasons to take public speaking classes
Introduction If you’re a coach, consultant, author, online entrepreneur, you have probably thought about how to share your message and increase your impact. To that end, you might have considered taking public speaking classes to...
Podcast Transcript
How Silence Can Lead to Success
Maryalice: Hey everyone, Mary Alice Goldsmith here — Director of Student Success. I am so glad to be with you today on The Speaker Lab Podcast. It's a true honor to have the opportunity to...
Find More Resources

Want to know exactly what to say to finally land paid speaking gigs?

We’ll send you the exact three emails you can send to conference planners and event organizers that Grant Baldwin (our founder) used to book over $2M in speaking gigs.

About The Speaker Lab

We teach speakers how to consistently get booked and paid to speak. Since 2015, we’ve helped thousands of speakers find clarity, confidence, and a clear path to make an impact.